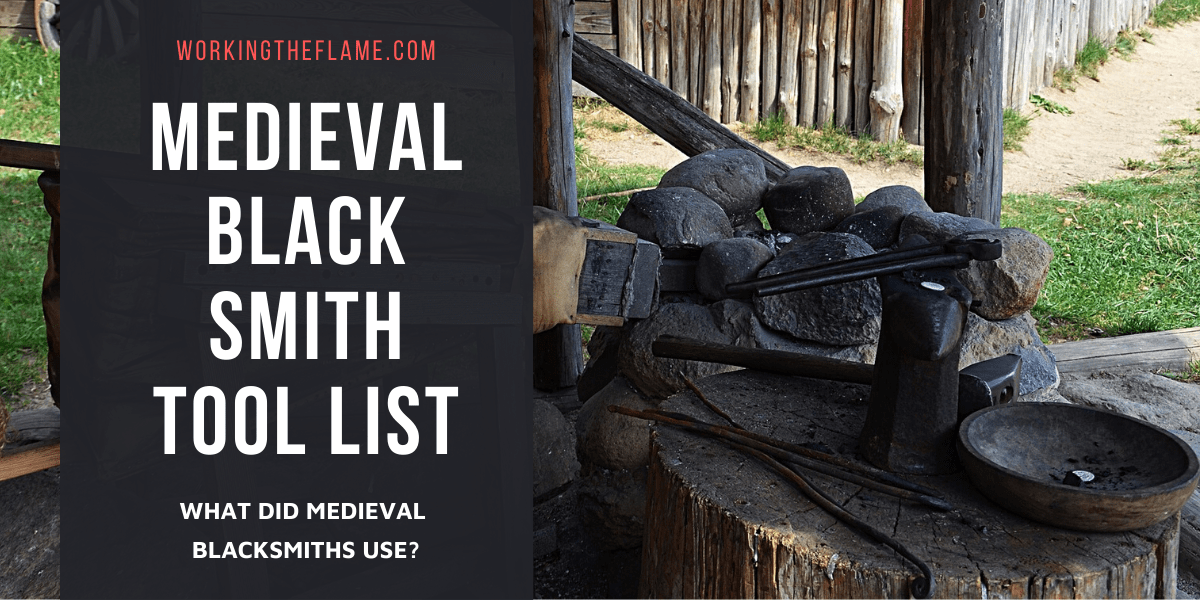 The blacksmith of the Middle Ages was an indispensable craftsman. From the 5th to 15th centuries, the roles and tools of blacksmiths changed and evolved with the projects they completed. In the early medieval period, a blacksmith worked within the walls of castles creating armor for his king’s many knights.

As the population of villages grew, and people began specializing in more varied occupations, blacksmiths were needed outside of the castle to create the many tools and household goods needed by common people and other tradesmen. Blacksmiths within villages made farming equipment, household goods, nails, and other small implements necessary for the work done in society at the time.

Unlike other craftsmen, blacksmiths made their own tools, and used these tools to make things that other people needed. In this way, smiths relied on themselves to maintain and grow their businesses. Medieval smiths were economical and used scrap materials to create their smaller tools like bits and nails, which are discussed below.

Blacksmiths used tools of varying shapes and sizes, and sometimes relied on the help of apprentices to help turn metal into functional items. Although some tools evolved between the early and late middle ages, many remained unchanged and are still essential to blacksmiths working today.

The medieval blacksmith’s forge was the main hub of his workspace. It was usually constructed of stone and contained the fuel and fire required for heating iron. Medieval blacksmiths used charcoal in their forges because it was inexpensive and readily available. The blacksmith held metal over the fire until it was heated enough and used the following tools to manipulate the metal into an endless array of items.

Medieval blacksmiths used anvils to shape metal heated in their forge. The anvil stood close to the forge to allow for the easy transfer of hot materials. Anvils were crafted from heavy iron and contained a variety of angles and surfaces on which metal could be shaped.

Some medieval blacksmiths traveled from village to village to find more work and promote their capabilities. Especially prior to the rise of village blacksmiths, the few smiths working outside of castles were in high demand in neighboring communities. Forge wagons contained a lighter-weight, portable forge that could be used and transported with ease. Traveling blacksmiths would pack a smaller assortment of tools that could be used to make an array of items, but were still light enough to be carried on the forge wagon.

The invention of bellows was significant to the efficiency and safety of medieval blacksmiths and their apprentices. Bellows concentrated air into the smith’s fire and made it hot enough to soften metal. This process also introduced the carbon required for transforming iron into hardy steel.

Prior to the invention of bellows, blacksmiths in the early middle ages enlisted their apprentices to blow on the fire through small tubes. This not only slowed the process of heating metal, but was less effective and potentially dangerous, as it required apprentices to put their faces extremely close to the flame.

Medieval hammers came in a variety of shapes and sizes to accommodate different projects. As with the other small tools discussed, blacksmiths could make new styles of hammers depending on the work being done. Smiths hammered heated metals on their anvils to create a range of different household tools, weapons, farming implements, and other items.

Similar to hammers, sledge hammers helped blacksmiths shape their metal. These hammers were generally bigger, heavier, and denser than traditional hammers, however, and were used for larger projects that required more metal.

Tongs were long, thin, iron pinchers that helped blacksmiths grab hot metal from the forge or plunge metal deeper into the coals for faster and more complete heating.

The handy drawplate allowed blacksmiths to efficiently craft wire for chainmail. This tool was a metal plate that contained different sized holes. The metal could be drawn through the holes and stretched into long, thin wires that were then curved into chainmail links. Prior to the invention of the drawplate, early medieval blacksmiths had to painstakingly pull and shape metal wire by hand. The drawplate was essential for blacksmiths specializing in the construction of armor, as it allowed them to work faster and make higher quality chainmail.

Swages were metal tools that contained grooves of different sizes. Metal was placed on the swage and then hit to take on the grooved, curved shape of the swage.

Similar to swages, fullers also made grooves in metal. Fullers could crease, fold, and stretch metal to create a variety of objects.

Medieval blacksmiths used punches to make holes in metal for different farming equipment and household items. They could make punches in various sizes to make larger or smaller holes in their work.

These tools were tapered to a point to help shape holes. After a blacksmith made holes in his work with punches, he could use drifts to perfect the shape of the holes and make small adjustments to their widths.

Like other tradesmen of the time, blacksmiths in the middle ages used chisels to shape their projects. Chisels could shave off bits of metal, create different shapes, or clean up edges.

The auger bit cut and shaped the edges of the blacksmith’s metal. It could also create the sharp edges and sword blades and knives. This tool was vital to castle blacksmiths who made weaponry.

Medieval blacksmiths sometimes needed to pour metal into molds instead of hammering it to achieve a desired shape. Heated metal was poured into molds and then cooled into the shape of the mold. Molds allowed blacksmiths to create items of uniform sizes and in doing so, create a larger quantity of items with a consistent, high level of quality.

Nails were important in the completion of many farming tools and household items that had several moving parts. Blacksmiths made their nails from scrap metal and then utilized them in their own projects. In this way, nails proved to be one of the most economical tools, as blacksmiths could craft them from recycled metal and make a profit by selling them.