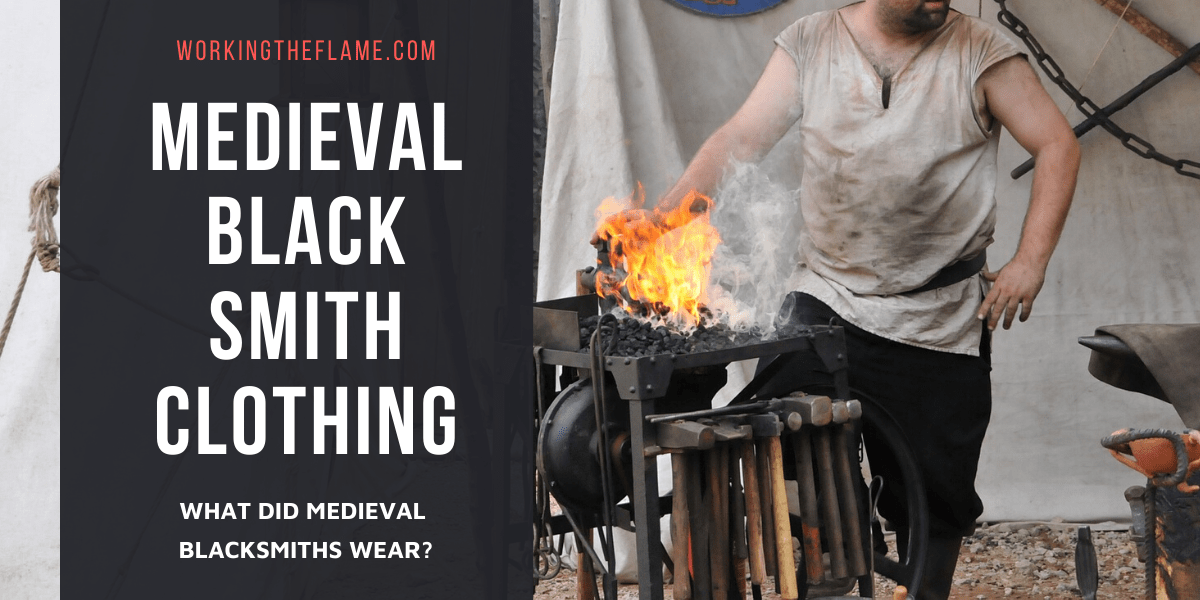 Blacksmiths living in the middle ages typically belonged to the peasant class and worked long, oftentimes strenuous hours each day. The blacksmith’s work environment was hot, confined, dirty, and dangerous due to the nature of their work.

Like other laborers and tradesmen of the time, medieval blacksmiths wore practical clothing that allowed for free movement and protection from the elements. The basic pieces of a blacksmith’s wardrobe did not differ much from the rest of the working class, but certain accessories like hats, boots, gloves, and aprons provided an extra layer of protection to smiths and were unique to their trade.

Clothing of the Medieval Peasant Class

The main clothing pieces worn by blacksmiths and other workers during the middle ages did not change much from the 8th to the 14th centuries. While upper-class people had a larger variety of clothing colors, fabrics, and styles available to them, medieval peasants and laborers wore simple, functional clothing that was appropriate for working outside. Men, women, and children wore simple tunics adapted from the Roman styles that were popular several centuries prior to the middle ages.

Both men and women possessed some level of basic sewing skills, and made their tunics by folding a length of fabric and cutting a hole in the center for their head. Sleeves could be added in colder months for warmth, but workers who spent a lot of time in the heat, such as blacksmiths laboring near a hot forge, would have worn sleeveless tunics during working hours. Tunics typically fell to at least the thigh and women’s tunics usually extended to the ground. Men who opted for shorter tunics wore thick hose to cover their bare legs.

While medieval peasants dyed clothing items like hoods and capes brighter colors, such as red or blue, the everyday workwear of tradespeople such as blacksmiths was generally muted in color and made to be practical, not pretty. Men’s clothing was duller and coarser than women’s, and it was made from the undyed wool of brown or gray sheep. To protect their skin from sparks and embers, medieval blacksmiths wore thicker fabrics than those who worked in the fields.

Aprons were made from one large piece of cowhide with ties attached around the neck and waist. Leather aprons protected blacksmiths from the fire and also kept their tunics clean. Because most medieval workers only owned two pairs of clothing—one for work and one for church—clothing needed to be kept as clean as possible. Laborers like blacksmiths did not have the time or money to splurge on new fabrics frequently, so aprons helped them wear their clothes again and again.

Belts and Boots of Medieval Smiths

Another accessory that was useful for the medieval blacksmith was a belt. Commonly called a girdle during the middle ages, belts were made of sturdy leather and allowed smiths to keep small tools on hand. This helped with efficiency and organization. Because a medieval blacksmith possessed a large number of tools, keeping go-to tools on his person allowed him to work with greater ease.

During the middle ages, working-class people wore simple leather shoes or boots to protect their feet while in the forge or the fields. While the shoes worn by the medieval upper-class are commonly depicted as having exaggerated, pointy toes, laborers and tradesmen actually wore shoes and boots with short, rounded toes. Pointed shoes would have made walking and working more difficult, especially when outside on uneven terrain.

Medieval blacksmiths would likely have opted for leather boots, which covered the foot and ankle and laced up in the front. Boots would have protected smiths from fire and metal shards better than the more flimsy leather shoes worn by other laborers of the time.

Protecting the Heads and Hands of the Medieval Blacksmith

Head coverings were a quintessential element of fashion in the middle ages. Hats, veils, and other headgear varied widely depending on social class and occupation. Blacksmiths wore linen or felt caps, which were typical of tradesmen at the time. These hats provided protection while working near an open flame, and also communicated to others the nature of a smith’s work. Because head coverings varied depending on occupation, one could tell what kind of worker someone was based on what they wore on their heads.

Hand protection was as equally abundant as headwear in the middle ages. Medieval blacksmiths wore gloves to protect their hands from hot coals and metal so they could work quickly without fearing accidental burns. Gloves could be fashioned from leather or fabric, but blacksmiths opted for sheepskin because it was more durable than fabric and more affordable than leather. The flexibility of sheepskin also helped blacksmiths maintain a greater level of dexterity, which was vital for their work.

The clothing worn by blacksmiths and other working-class people of the middle ages provided practical, affordable protection for a variety of work environments. Blacksmiths chose clothing pieces and accessories that allowed them to work quickly and safely. The simple silhouette of a sleeveless tunic helped medieval blacksmiths work more comfortably around their hot forge. Aprons protected valuable fabric from burning and remain an essential part of a blacksmith’s wardrobe today. Belts and boots allowed blacksmiths to work with efficiency, while hats and gloves provided an extra layer of protection and identity.

1 thought on “Medieval Blacksmith Clothing (What Did They Wear?)”