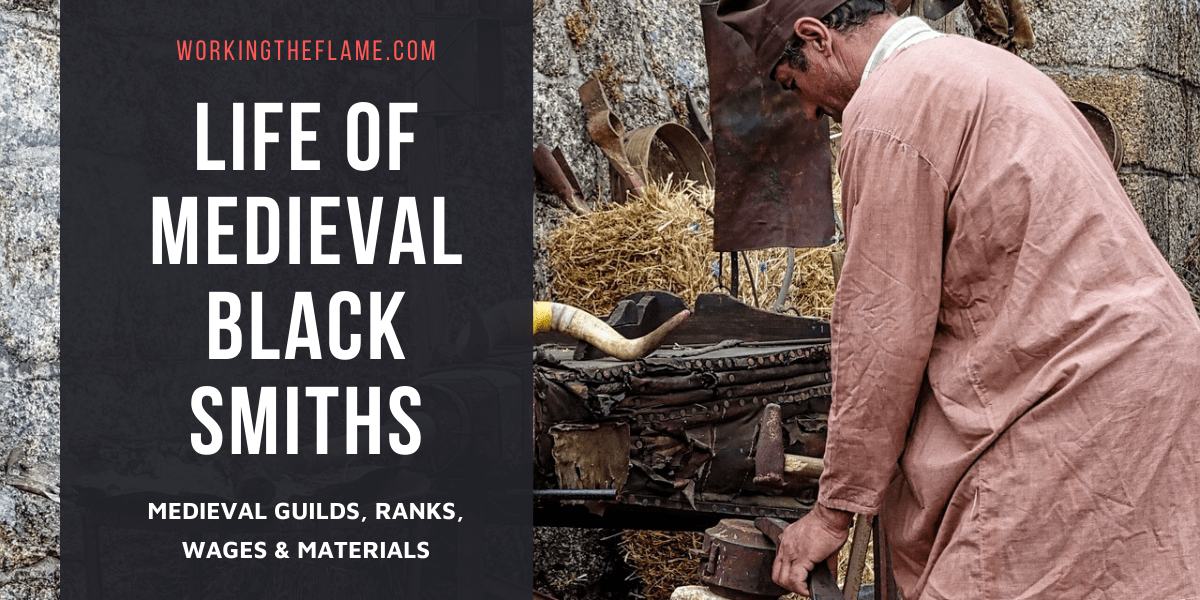 Medieval blacksmiths played an important role within their communities as the creators of weapons and everyday tools. They lived and worked in castles, cities, and villages and served a wide range of people—from powerful kings to humble farmers. Many medieval smiths went through rigorous training and rose through the ranks of apprentice, journeyman, and master to become more respected and influential craftsmen.

In a time when the mining and smelting of iron underwent major innovations and the average person needed durable metal products that were both local and affordable, the work of blacksmiths was in high demand. Not simply an armorer for kings, blacksmiths established themselves as vital fixtures within their communities during the middle ages.

Where Did Medieval Blacksmiths Work?

In the early middle ages, the majority of blacksmiths worked within the walls of castles, making armor and weapons for kings, lords, and other nobles within the upper-class. Because iron was more scare in the early medieval period, it was mostly reserved for these items and thus, the need for blacksmiths in cities and rural villages was also low.

By the middle of the 12th century, however, as mining technology improved and lower-class people started using more metal objects in their everyday lives, the blacksmith migrated from the castle walls to live among the masses in villages and cities. Castle smiths gained protection by working for wealthy, powerful people, and they also had the physical security of the castle walls behind which they lived and worked. These smiths spent most of their time close to their illustrious employers, and only strayed from the castle if there was a high demand for work in a nearby city.

For urban blacksmiths, the opposite was true. They rarely left their specific community unless they were a traveling blacksmith with the right equipment (a forge wagon was necessary for long-distance work) and they rarely would have been summoned to a castle for employment. Regardless of where blacksmiths worked, most smiths did not wander too far from their main clientele base and preferred to build their reputation in one small area.

What Items Did Medieval Blacksmiths Make?

The introduction of blacksmiths to bustling cities and isolated villages changed the way in which they interacted with their clientele and diversified the types of products they created. Whereas castle smiths mainly created swords, daggers, lances, arrowheads, armor, shields, and other objects used in warfare, village and city blacksmiths had a much wider range of projects requested by their clients.

Besides the occasional weapon, blacksmiths outside of castle walls more commonly crafted farming and household tools, nails, hinges, locks, keys, jewelry, and even torture devices. Village smiths likely spent most of their time working on farming tools, household items, and nails, while city smiths would have been in charge of crafting the more intricate and specialized items like locks, jewelry, and torture devices. Because these products would have been sold to wealthier clients, city blacksmiths were usually more well-off than their village counterparts.

While the medieval blacksmith is often thought of as being a master armourer, it is apparent through the work of village and city smiths that they played a vital role in providing important tools for people of all occupations and social classes. In a time when travel was dangerous and costly, people relied on their local craftsmen to make the tools they needed at an affordable price. The variance in the type of work blacksmiths did in castles, villages, and cities can also be attributed to the rise of iron technology and a greater demand for metal items in the mid to late middle ages.

Improvements in the ways  iron was extracted and manipulated, as previously mentioned, altered the materials with which blacksmiths worked and allowed them to make a wider array of stronger, higher quality items. Metallurgists in the 13th century learned that cast iron, although brittle, was easy to mold and so casting iron in molds gained popularity amongst blacksmiths during this period.

Cast iron remained the most widely used metal in the early middle ages, although lords and knights desired a stronger metal that would produce high-quality weapons and durable armor. By the 1400s, metal workers discovered how to increase the amount of carbon in cast iron to make it more durable. The carburizing process started with mined iron that melted in a furnace until it formed a bloom of reduced iron particles. Metal workers repeatedly heated and hammered the blooms to get rid of excess slag and introduced carbon to create a stronger metal.

The final product was an iron or steel bar that blacksmiths bought and worked into whatever they desired. The influx of iron mining and smelting occurred due to the greater amount of wars waged during this time period, and increased the demand for castle blacksmiths’ weapon-making skills.

Throughout the middle ages, blacksmiths used charcoal as their main source of fuel for their forges. Despite the rapid deforestation that occurred as a result of making charcoal, the use of other fuels never took hold because of charcoal’s affordability and its predictable characteristics when burned. For medieval blacksmiths, the cost of materials and their effectiveness were of utmost importance.

The Importance of Medieval Blacksmith Guilds

Blacksmiths living in cities during the middle ages worked under the authority of local guilds, which were founded sometime during the 12th century. These medieval organizations brought together working-class people like merchants, artisans, and craftsmen and operated as a combination of a trade union and vocational school.

Guilds also monitored the work of tradesmen and the quality of products. Territorial by nature, guilds claimed certain sections of cities and specific industries within them and did not stray from their assigned area.

Guilds organized their members by rank: apprentice, journeyman, and master. Blacksmiths and other craftsmen first gained access to guilds in their childhood. Parents sent their young sons (usually between the ages of seven to thirteen)  to live with master blacksmiths who would teach them the basics of the trade in exchange for completing manual labor around the shop.

Apprentice blacksmiths oftentimes cared for the forge by cleaning it, keeping a fire going, and making any necessary repairs. Because apprentices lived with their masters during their angsty teenage years, many misbehaved and were punished accordingly. Masters could beat their apprentices, withhold meals, and make them complete unpleasant tasks if they were mischievous. Apprentices stayed with their masters for seven to nine years before they were able to claim journeyman status.

Journeyman blacksmiths possessed the basic skills necessary to work alongside their master, seek work with other shops, or even open their own businesses. They became members of their local guild and were considered members for life. Journeymen received support and ongoing opportunities from their local guilds and built strong reputations within their communities by doing so.

The strict rules of medieval guilds pertaining to journeyman qualifications are well-documented. In 15th century Nuremberg, for example, journeyman were required to work for four years as indentured servants to a master before they could achieve recognition for their talents. Guilds also required journeymen to submit work for examination each year in each area of expertise. So, a journeyman who perhaps crafted swords, locks, and keys would need to submit each item to his guild annually for inspection. If the guild approved the craftsmanship of the products, the journeyman could eventually move up to master status.

Master blacksmiths enjoyed certain powers within their guilds. They could vote in guild meetings, set prices on their products, and help with quality control measures. Like journeymen, masters submitted examples of their work to their guild and gained popularity by doing so. It sometimes took years for a master blacksmith to craft a product for guild review, because it was important that he showed every possible skill and create a unique piece that stood out to guild members. His reputation and livelihood depended on a solid review.

Although the activity of guilds was, in many ways, private and exclusive, they also contributed to the overall health of industry within medieval cities. The quality control measures enacted by guilds ensured that products on the market were worth their price and that craftsmen were not involved in forgery or fraud. Guilds even held trials for serious business concerns. In order to gain the favor of powerful leaders within cities, and the populous in general, guilds used their expertise to make items for local charities and churches. Finally, medieval guilds attempted to expand businesses by hiring more workers. One blacksmith shop in Germany employed twenty-two masters and thirty-five journeymen, which was unprecedented for the time.

Guilds helped ensure that blacksmiths in the middle ages received fair compensation for their work, even if it sometimes did not come in the form of money. Blacksmiths oftentimes worked in exchange for goods or services with other workers in the community. A farmer, for example, might need a certain implement made in exchange for peas or wheat. When village and city blacksmiths did work for money, they set their own wages according to those recommended by guilds and were paid per item, not per hour. Castle blacksmiths earned an annual wage from their employer in addition to the set price of individual items. Those specializing in armor usually made suits one-size-fits-all and charged extra for a custom fit.

Medieval blacksmiths working in castles, villages, and cities created essential products for people of all walks of life. The work completed by blacksmiths may have differed according to where they lived and worked, but it was still vital to the development of societies during this period. While medieval smiths are usually associated with swords and shields, they actually created a wide range of products and many worked under the supervision of powerful guilds that expected high-quality craftsmanship and honesty. The work of blacksmiths within medieval society was important to all, highly varied, and well-respected.