Medieval scholars have long been fascinated by the array of weaponry utilized during this tumultuous period of history. Although many interesting and brutal weapons were wielded by medieval fighters, none was as widely utilized as the sword.

One of the most highly regarded medieval sword experts is Ewart Oakeshott. He organized medieval sword types into over 20 categories and classified these weapons by the following characteristics: profile, cross section, blade length, fuller, point, grip, weight, purpose, and time period.

While we won’t be diving into the Oakeshott Typology in detail, we will cover some of the most famous styles and their place in history. Consider this article a jumping-off point in your research of medieval swords.

The history of medieval swords is complex due to the number of different styles used, the fact that many styles were wielded at the same time.

Sword styles evolved with changing combat methods from the age of the Vikings to the dawn of the Renaissance, and we explore these changes here by discussing some of the most famous and important swords of the medieval period. 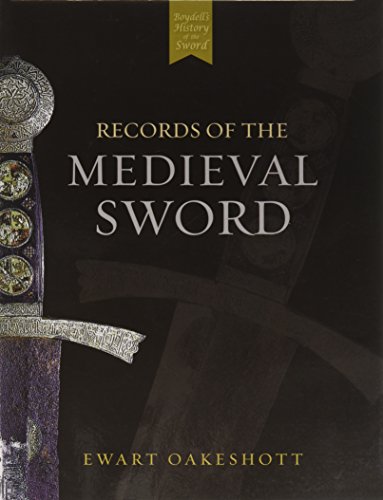 Records of the Medieval Sword
Buy on Amazon

While many sword styles existed in the early middle ages, the most recognizable style is the Viking sword, wielded by mighty Scandinavian warriors.

While Viking swords proved extremely durable and efficient, they were also made to look beautiful. They are an object of fascination for history buffs and Viking enthusiasts today, and reproduction swords are often collected and displayed.

The longsword is ubiquitous to the European medieval period. This style of sword was developed and widely used in the high to late middle ages, from around 1250-1550.

The longsword developed from earlier Viking and Frankish sword styles, with the swords of the Celts, Germans, Anglo-Saxons, and Romans also inspiring the design of this weapon.

Longswords are characterized by their long blades and long grips. They were commonly wielded by knights and other fighters on foot or on horseback and are distinguishable from other swords by their overall size.

Ewart Oakeshott’s Type X longsword enjoyed the longest period of use out of all medieval swords. Vikings, Normans, Crusaders, and knights of many countries all wielded the Type X in famous battles.

Type X featured a wide blade and was 31-33 inches in length on average.

Oakeshott Type XII is a knightly longsword that was forged with a narrower blade than its predecessors. This sword was wielded on foot or on horseback and proved most effective when paired with a shield.

Type XII was forged in the transition from the high to late middle ages, and possessed many of the same characteristics as earlier Type X and Viking styles.

Similar in style to Type XII, Type XIIa is a true late middle ages weapon. This sword is sometimes referred to as the Great Sword of War because it is considered the archetypal medieval sword.

Measuring 4 feet in length and weighing 3-4 pounds, this large and heavy sword caused major damage in battle, especially when used from the back of a horse.

Other defining features of Type XIIa include a wide blade and straight cross-guards.

As the most common sword of the 13th and 14th centuries, Type XIIa would have been used by thousands of fighters in the Hundred Year’s War, the Crusades, and other major European conflicts.

Oakeshott Type XVa was developed and widely used in the 14th and 15th centuries. This classic two-handed sword was a powerful weapon developed for thrusting maneuvers.

Unlike other swords before it, Type XVa had a more pointed tip that could stab through the gaps in armor plates. The shape of this sword would be recreated in later sword styles, as it proved deadly in battle and effective against new armor designs.

Like the Type XVa sword discussed previously, Type XVII featured a pointed tip that could be powerfully thrusted through gaps in armor.

Type XVII was more slender than other medieval swords and is reminiscent of later Renaissance rapiers due to its narrow proportions.

This sword style is perhaps most well known for its weight. Some swords could be as heavy as 4 or 5 pounds! The weight of this sword, combined with its narrow, pointed shape, made it the perfect weapon against new and improved styles of armor.

The dawn of the Renaissance era brought new technologies and methods of combat. The development of the bastard sword from the medieval longsword is one of the markers of the end of the late middle ages.

The earliest bastard sword is traced the early 1400s, and the use of the sword spanned to the end of the 16th century.

This sword style was developed from the longsword and shares many characteristics. The defining feature of the bastard sword is its special grip, which was designed for one handed or two handed use.

The blade of bastard swords was usually tapered and flat or hexagonal. Because of its development as a fighting sword, knights and men at arms wielded the bastard sword in battle.