Table of Contents show
1 A Brief History of Pyrography Art & Wood Burning [Updated]
1.1 The Origins of Early Pyrography
1.2 The Evolution of Medieval Pyrography
1.3 Pyrography at the Turn of the 20th Century

Pyrography, or pyrogravure, is an artform traditional to cultures around the world. It involves using heated metal tools to burn designs into wood surfaces.

Common items decorated with pyrography designs include cups, bowls, chests, and furniture. Light-colored woods like beech, birch, sycamore, and basswood have been commonly used in this artform, with pine and oak being other desirable alternatives.

Pyrography is a term used since fairly recent times to describe this artform. It comes from Greek and literally translates to “writing with fire.” Other names used to describe the process are woodburning and pokerwork.

The term pyrography came into use in the early 1900s. Regardless of its name, pyrography has appeared in the art traditions of global cultures for thousands of years and continues to be practiced today. 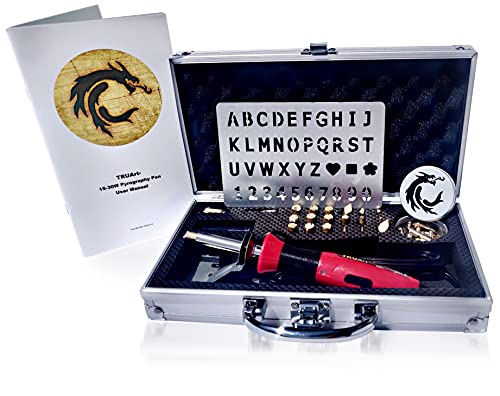 The Origins of Early Pyrography

Evidence from Egypt, China, Rome, and Peru suggests that pyrography has been around in a primitive form since ancient times. In the Han dynasty in China, pyrography was known as “fire needle embroidery.” Early artisans used heated metal rods of various sizes to burn designs into wood.

Both the Nazca and Moche civilizations of Peru are known for their early pyrography artwork. One of the earliest examples of South American pyrography is a Nazca mate cup (pictured above) dating to around 700 AD. This tiny wooden cup is engraved with hummingbirds drinking nectar.

The Evolution of Medieval Pyrography

Pyrography artists in the middle ages used newly invented portable wood stoves as a heat source. These stoves had small holes in their lids for pokers to be placed through. The pokers rested in the holes and heated over the coals of the stove until they were hot enough to use. Artists carried several pokers with them at all times so they could continue working while other pokers heated.

Although pokers were preferred, other sharp metal objects like needles and knives were used.  There is evidence to suggest that medieval blacksmiths partook in pyrography due to the nature of the craft. Both pyrography and blacksmithing required the use of a heat source, so many blacksmiths used the heat of their forges to craft with both metal and wood.

Pyrography at the Turn of the 20th Century

At the turn of the 20th century, a Melbourne architect named Alfred Smart discovered a new, more effective way to practice pyrography. He found that benzene fumes could be pumped through a heated, hollow pencil. This allowed tools to remain hot through the duration of the pyrography process. The pencil was made of platinum and connected to a bottle of benzene and a rubber ball that was squeezed to push fumes through the pencil.

This new process allowed artists to make different shading and tints in wood, which previously could not be done. Smart’s discovery was improved upon further by eventually becoming electrified.

Until the late 19th century, pyrography was an artform dominated by men. The invention of pyrography machines and kits for use in the home popularized the craft and made it accessible to women who were expected to beautify their homes with handiwork. Pyrography kits were sold in catalogs and women’s magazines and were promoted in various publications as a good pastime for young women.

Kits were affordable and allowed women to create beautiful items that could decorate their own homes, or be sold for use in someone else’s. Women typically completed small projects like picture frames and handkerchief boxes but large furniture pieces like cabinets and chairs could also be burned.

Since its ancient beginnings, pyrography has been a global artform that has evolved to fit the needs and preferences of the time. Found on almost every continent, artists in early times, the medieval era, and the turn of the last century have used wood burning to add beauty and intricacy to everyday items. Pyrography has and continues to have significance in the arts of cultures of people around the world.