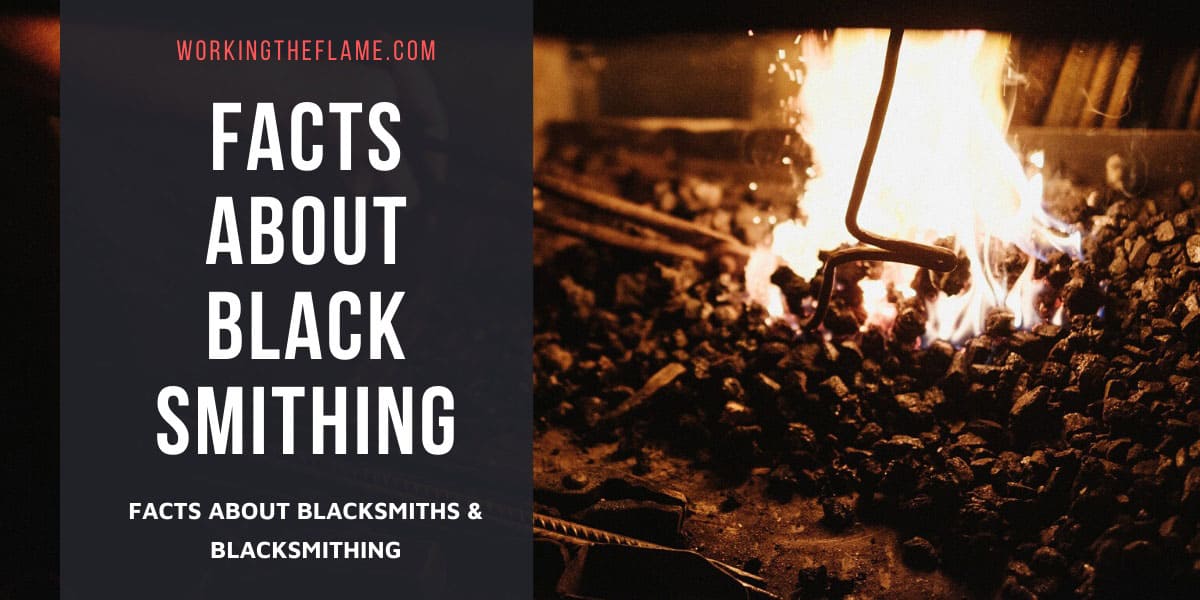 Facts About Blacksmithing Throughout History

Blacksmithing is a type of metalworking process that uses iron, heat, and hard work to transform metal into endless types of useful and beautiful tools and objects. The importance of blacksmithing in history is well-known, but there are also many interesting, lesser-known facts about blacksmiths in modern times and throughout history that are worth reading about and remembering.

Back in the days prior to the Industrial Revolution, blacksmiths worked in every city, village, and rural settlement in America. Today, only around 5,000 to 10,000 people practice the craft. Of those, only 10% do it professionally. Many blacksmiths living today, both in America and worldwide, use their skills as blacksmiths to produce supplemental income.

While blacksmithing may not be their main gig, modern blacksmiths practice this ancient art because of their love for its intricacies and tradition. Even as hobbyists, blacksmiths have a lot to gain from learning blacksmithing and sharing their skills with others.

2) The shape of a modern anvil is called the “London Pattern.”

Anvils haven’t always had the distinct shape that we recognize today. The London Pattern (pictured) anvil came into popularity in the late 1800s and remains the most common shape of anvil in use by modern smiths. This design is now considered “standard” in the industry and has several key features that allow blacksmiths to make sophisticated finished products.

London pattern anvils have a horn, a step, a face, a hardy hole, and a pritchel hole, which are all used for shaping and finishing an item. Each of these elements vary slightly depending on the anvil manufacturer and blacksmiths can choose the right anvil for them based on their preferences.

JD Napier, a blacksmith residing in Kentucky, created the world’s largest anvil made entirely of steel. While he explains there are larger ones cast from bronze and stone, this one is the real deal, weighing over 3 tons! Its length is 208 centimeters, making it far larger than a person, and truly a massive achievement.

The anvil took over 15 years to complete and several welders worked for weeks to ensure each piece of the anvil was secured in place. Napier created the anvil with practicality in mind. While it is truly enormous, Napier says it is completely usable and can accommodate up to 3 blacksmiths working on it at one time.

Some of the most well-loved fantasy video games feature blacksmith characters. In World of Warcraft, players can choose blacksmithing as a profession and learn to produce valuable weapons and armor. Most Legend of Zelda games also feature at least one blacksmith who interacts with main character Link as a helper or mentor.

2) Blacksmithing experienced a surge in popularity with The Lord of the Rings movies.

Fans watching The Lord of the Rings at home discovered the art of blacksmithing through bonus content on their DVDs. Filmmakers and artisans explained the process of making the weapons, shields, and armor used in the film. This inspired many viewers to pursue blacksmithing as a hobby or even career because they were so enamoured by the craftsmanship and detail behind how the props for the film were made.

3) Some of your favorite characters from famous films are blacksmiths by trade.

Memorable characters such as Will Turner from Pirates of the Caribbean and Kate from A Knight’s Tale are both smiths. Turner ended up trading in his sword making for swashbuckling, but was nevertheless skilled at producing high-quality weapons. Kate the farrier made a lovely set of armor for Heath Ledger’s character in A Knight’s Tale and is an important voice of reason throughout the film.

Although not a major character in The Princess Bride, Domingo Montoya, a famous swordsmith, passes his love of the craft down to his son Inigo, who seeks to avenge his death.

1) The Romans knew the secret to making steel, which would be lost for a thousand years.

The ancient Romans discovered how to turn plain iron into steel to produce higher quality, durable weapons and armor. They reheated iron between layers of charcoal, which contains carbon and makes steel when mixed with the iron. They probably learned this secret from civilizations in India, but it was lost when the Roman Empire fell. Europeans wouldn’t discover how to make steel again for nearly a thousand years.

2) The Romans did not possess a natural abundance of iron in Central Italy.

Only through expansion and trade did the Romans gain access to the valuable metal ores needed to maintain their growing civilization. Following the Punic Wars, Rome’s influence spread to regions like Gual and Iberia (modern day Spain and Portugal), which were rich in minerals like iron ore.

At the height of their power, the Romans controlled most of the Mediterranean region and with it, mineral-rich areas. Gold, silver, iron, and other metals taken from these regions kept Rome wealthy and well-stocked with goods made by metalworkers like blacksmiths.

1) The knife was the most important tool made by Viking blacksmiths.

When we think of Vikings, we likely imagine fierce warriors with sophisticated weaponry pillaging monasteries and causing overall mayhem. In reality, much of Viking life centered around everyday survival, domestic duties, and living off the land. A knife would have suited the everyday Viking as an important multipurpose tool. Whether for eating or carving, knives made by Viking blacksmiths had to be durable enough to withstand life’s demands.

2) Vikings buried blacksmiths with their tools.

In 2015, Norwegian archaeologists uncovered the remains of a Viking blacksmith, complete with a set of his tools. The blacksmith’s grave included over 60 artifacts, the two most striking being a hammer and tongs. These tools sat in the top layer of the grave, suggesting that they were the most important of the blacksmith’s many other possessions.

Archaeologists believe the Viking was buried with his tools to illustrate his skill as a blacksmith and honor the work he did throughout his lifetime. A blacksmith was highly important to the health of a Viking society, as they relied on the tools and weapons that only a skilled smith could create.

3) Viking blacksmiths used the bones of ancestors and animals to strengthen their swords.

Scandinavian blacksmiths commonly used bog iron for their projects, which was impure, soft, and resulted in poor quality final products. Vikings believed that adding the bones of the ancestors and powerful animals to their forges would help strengthen the iron through spiritual means. And they were right, although it was science, not magic, that made the iron stronger. By adding bones to the forge, a Viking blacksmith also added carbon, which creates steel when introduced to iron.

Early Anglo-Saxon blacksmiths made do with what they had. Using boulders worked for forging large items of a simple design. They could be found everywhere and limited the need for a nomadic smith to carry heavy equipment with him. Smaller projects that required more meticulous shaping did require an anvil of some sort, and the use of an anvil would later become the norm.

2) Blacksmiths were featured in a classic Anglo-Saxon riddle.

The Anglo-Saxon people used riddles as a way to pass the time and teach each other important lessons. One of the surviving riddles describes the work of a blacksmith in making a shield, which is the answer to the riddle. Here is an excerpt:

Hard edged things made by the blacksmith’s hammer attack me.

Each time I wait for something worse.

Or give me medicine made from herbs.

Instead the sword gashes all over me grow bigger day and night.

This poem illustrates the work of a blacksmith within Anglo-Saxon society and the importance of weapons and armor during this time period.

3) The work of Anglo-Saxon blacksmiths can be compared to that of a 19th century smith.

Southampton dig sites reveal that Anglo-Saxon blacksmiths were highly skilled at producing quality steel. According to experts, their work rivals that of a smith in the 1800s. Anglo-Saxon smiths reheated their metal to reach the carbon levels required to produce high-quality steel. Their process would not be implemented again with such exceptional results until the 19th century!

1) Widowed women could be blacksmiths.

Although married women in the middle ages experienced barriers to doing “men’s work,” widowed women could take over the business of their late husbands if they had no other close male relatives. However, they were not allowed to take in apprentices, and some cities, like Paris, banned businesses managed by women. Despite these challenges, a significant number of widowed women enjoyed economic freedom through their ownership of blacksmith shops and other businesses.

2) A story of King Arthur shows the importance of the blacksmith in medieval times.

While other trades make a strong case, the humble blacksmith proves to King Arthur that he is the most important craftsman in the building of Camelot:

“The king asks artisans to explain why their work was important to building Camelot. Tailor, carpenter, stone mason, goldsmith — each make a strong case. But then Arthur thinks twice.

This little story reminds us of just how vital blacksmiths were within early societies and throughout history. While other craftsmen had skills and important roles to play within their communities, they still required a talented blacksmith to make the tools they needed to perform their duties effectively.

3) Many blacksmiths were also farmers.

People in the middle ages needed blacksmiths to make their tools and household items. Blacksmiths were therefore quite busy much of the time, but would supplement their income if need be through farming.

Blacksmiths could sell their crops or trade for things they needed with other craftsmen in their community and therefore did not have to rely solely on blacksmithing for a steady income. This helped free blacksmiths of the financial burdens other people faced during the medieval period. Blacksmiths working for a lord were oftentimes granted land to work in exchange for their services.

By the time of the American Revolution, blacksmiths living in the Thirteen Colonies engaged in what was essentially a black market. The British banned the production of iron in the Colonies, but blacksmiths ignored these regulations and continued to manufacture iron bars and metal goods like tools and weapons. This refusal to comply with British law allowed colonists access to the very weapons used to fight the Revolutionary War.

During the colonial period, blacksmithing included people of all racial backgrounds. Whites, free blacks, and slaves all contributed to the craft and produced high-quality goods. Whites and free blacks working in cities and villages earned their reputations through the work they did and each acquired a steady stream of income through proving their skill as craftsmen. Enslaved blacksmiths could buy their freedom by working extra hours and creating excellent finished products.

Blacksmith shops were places for people of various backgrounds to meet and discuss the news of the day. Since everyone in a town or city depended on a smith’s services, people of different socioeconomic backgrounds could all interact freely in the workshop. As the blacksmith worked on different projects, his patrons often chose to wait in the shop for their order and chat with others. Politics, gossip, and general information passed between patrons and blacksmith shops earned a reputation as the place to be for informal social gatherings.