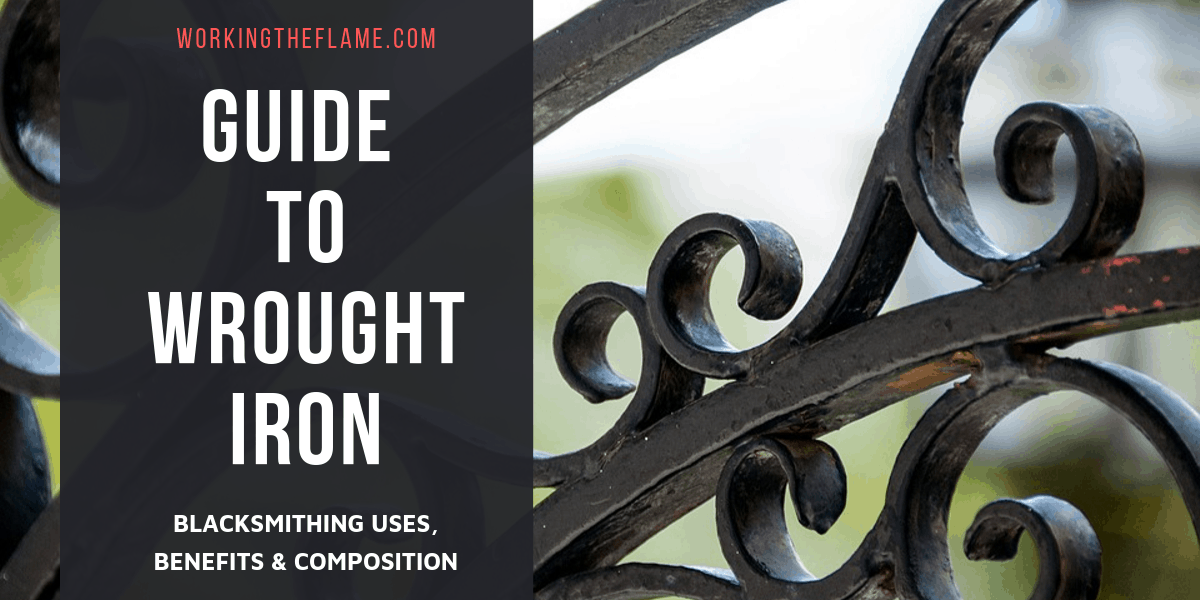 Wrought iron is a type of refined iron that is smelted and worked on with tools. It is an iron alloy with a very low carbon content. The term wrought iron literally means “worked iron,” stemming from the archaic version of the word “worked.”

As blacksmiths, we work on iron with tools in order to shape it and reinforce its metallurgical properties. Wrought iron is known for its durability and has been used in various applications for centuries. Unfortunately, its uses are less prevalent in modern-day society because it is no longer commercially sold. Even though it is not easily procured, wrought iron continues to be a sought-after material for decorative and artistic purposes.

Different Types of Wrought Iron (How it’s Made)

The true form of wrought iron is an iron alloy that has been worked by a blacksmith in order to deform it. Despite the fact that the term “wrought iron” implies that it was worked on by blacksmiths, the term can also refer to the material itself, regardless of the way in which it was deformed. There are two types of starting materials that are considered wrought iron – charcoal iron and puddled iron.

Charcoal iron is produced via a small-scale forging method. The way in which charcoal iron is first made involves placing the raw iron ore into a charcoal furnace or forge to heat it up just below its melting point. Afterwards, the hot iron and its impurities are removed from the heated forge and subsequently worked with tools. These tools are typically a hammer and an anvil. The purpose of this process is to remove as many of the impurities from the iron as possible.

Puddled iron, on the other hand, can be indirectly produced from the same process that creates cast iron, a different type of iron alloy. This process is called the puddling process. The puddling process is the large-scale production process of wrought iron. Cast iron is typically made by melting iron ore and mixing it with scrap metals. This mixture is then “cast” by pouring it into a mold and allowing it to cool. The addition of the scrap metals causes the high percentage of impurities found in cast iron.

Similarly, the puddling process involves continuously mixing the crude iron in a furnace to remove its impurities through oxidation. The long metal rods that are used to mix the molten iron are actually consumed during the process. The iron material can be easily shaped at the high temperatures present in the furnace and later cooled for finishing work.

The Composition & Properties of Wrought Iron

Wrought iron is composed of iron and up to 2% of the byproducts of smelted iron – also known as “slag.” The term slag refers to the glass-like material that is produced when iron separates from iron ore at high temperatures. It is a mixture of silicon dioxide and metal oxides made up of the waste removed from the raw ore material. Wrought iron typically has a visible fibrous structure due to the silicates from slag. In addition to the siliceous slag, wrought iron contains less than 0.08% carbon. Since carbon makes iron stronger by changing the structure of its crystal lattice, the very low carbon content in wrought iron actually makes it more ductile, therefore easier to shape.

Although wrought iron and cast iron are both made from iron ore, they have very different microstructures. The carbon composition of wrought iron starkly contrasts that of cast iron, which is greater than 2%, making cast iron much more brittle. However, like cast iron, wrought iron is prone to rusting, so it typically needs to be coated by a paint or protective layer in order to effectively minimize its exposure to oxygen and water. Without this preventative measure, wrought iron is very susceptible to rusting in outdoor conditions.

Despite the possibility of rusting, wrought iron is actually considered to be corrosion-resistant. This characteristic is actually caused by the slag incorporated in its fibrous grain structure, which simultaneously mitigates progressive corrosion and resists shock fatigue.

The low carbon content in wrought iron  contributes to its high malleability, but it does not preclude it from becoming a stronger metal. When we forge wrought iron, we are actually increasing its strength. Forging causes the grain structure of the metal to become more uniform as it is worked with tools. This process creates a directional grain flow during deformation, yielding an overall increase in its structural integrity.

Wrought iron is a great metal to forge. It is incredibly easy to work when compared to steel, a hard iron alloy, because of its purity. The minimal carbon content in wrought iron is what makes it more malleable. Hand forging wrought iron, or blacksmithing, requires a charcoal furnace to heat up the iron ore and separate it from its impurities. The use of charcoal definitely increases the cost of production, but the tools needed to forge the heated iron workpiece are relatively simple.

The ductility of wrought iron allows us to deform the workpiece into very intricate shapes. This property is a great trait for metal used for elaborate, decorative purposes. Wrought iron forgings can not only have a nice physical appearance, but they can also be strengthened with a hammer to improve their structural soundness. Wrought iron is easy to reheat and rework if additional changes need to be made to a finished work. 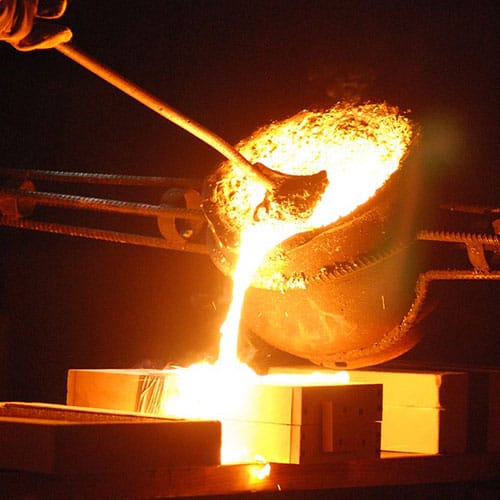 Heavy forging wrought iron typically refers to a more industrial, large scale process. The way in which heavy-forged wrought iron is made is through the previously-described puddling process.

The main advantages of this process is the large quantity of material that can be produced from it. The molten pig iron in a furnace is easy to work because it is incredibly soft, even softer than pure iron. This phenomenon is caused by the reduced amount of friction among its fibrous grains due to the slag impurities. However, the temperatures in the furnace may need to reach up to 1450°C to maintain the melted phase of the metal, making the energy costs associated with this process much higher than regular hand-forging. Depending on the demand for the wrought iron product, these costs could either be low or very high.

Early uses of wrought iron can be dated back to early civilizations. People in the Middle East and in Greece used wrought iron to forge tools and weapons before 1000 B.C.. Wrought iron weapons also began to replace bronze weapons in both Asia and Europe.

The beginning of the Middle Ages marked a shift in the way in which wrought iron was used.As a result, its range of applications quickly went beyond tools and weapons and extended to decorative purposes. This type of ironwork was used for elaborate gates and railings throughout many European homes and landmarks.

The production of wrought iron reached its peak in the 19th century. The demand for wrought iron railway tracks skyrocketed when the railroad emerged as the modern system of public transportation in Europe and in the United States. Wrought iron became known for its incredible durability and, therefore, was also used to manufacture a plethora of household tools, utensils, and decorative metalwork. These products made with wrought iron had very long life expectancies with minimal maintenance required, as long as they were properly shielded from corrosive substances.

As wrought iron was replaced by steel in most of its applications, many wrought iron mills were forced to shut down due to a lack of business. Wrought iron is still used today, but to a much smaller extent than it was in the past. Most of the true forms of wrought iron in the world today are found in structures that were built in the 19th century and have successfully withstood the tests of time. In fact, many modern products that we might consider to be wrought iron today are actually made of mild steel, which has a very different chemical composition and structure. Finding true wrought iron products today is considered a rarity and its production a skilled art form.

Where to Purchase Wrought Iron?

Since commercial wrought iron ceased to be produced in the 20th century, its availability is very limited in today’s society. A lot of wrought iron products available for purchase on the market today are actually repurposed wrought iron items that were originally manufactured in the 19th century by blacksmiths. Antique items like fences and staircase railings can be purchased and restored. Newly wrought iron products, however, are now considered artisanal items.

Even though the raw materials are not impossible to find, the labor-intensive nature of the final product alone makes wrought iron products rather expensive in this day and age. Local blacksmith shops are typically the best place to commission a custom wrought iron piece, but it is possible that the piece will technically be repurposed wrought iron or mild steel.