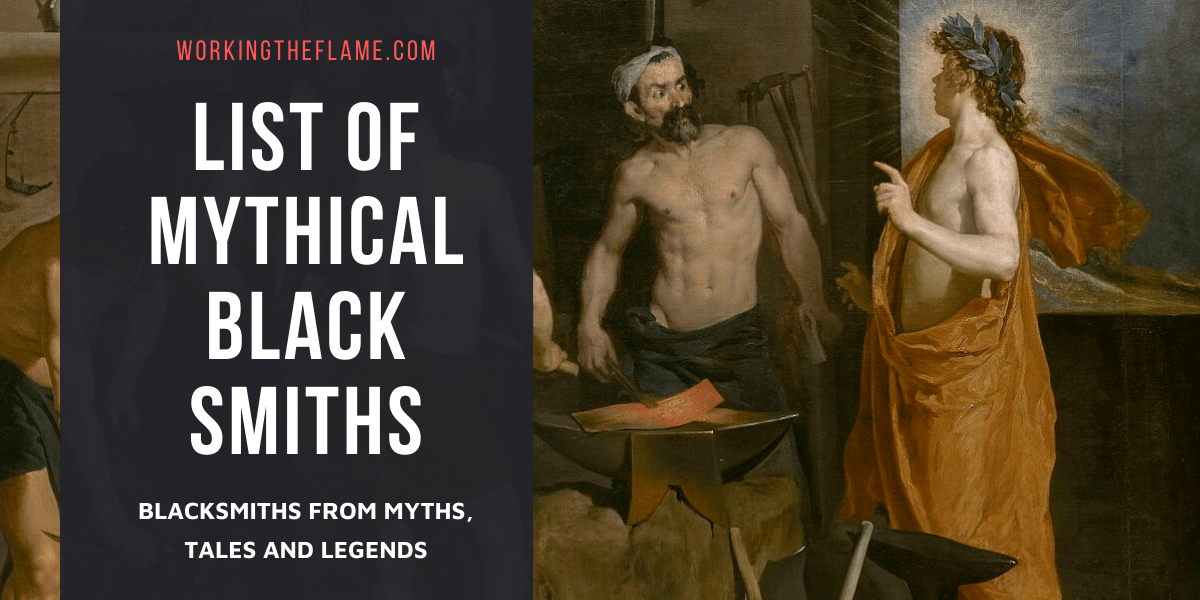 Blacksmithing is an ancient art that has played a vital role in the development of civilization for thousands of years. The ability to work metal into weapons, tools, and other useful items was deemed a mysterious, awe-inspiring skill to our ancestors, and because of this, the most powerful creator gods of cultures around the world were also the gods of fire, metalworking, and the forge.

Although the following gods have unique origins and characteristics, the fact that they exist within early cultures and play such important roles within the mythology of these cultures illustrates the influence of blacksmithing on the everyday lives and personal beliefs of people living long ago. 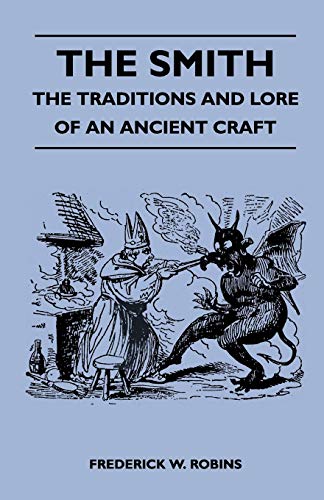 According to the book of Genesis, the first blacksmith was a man named Tubal-Cain. A relative of Cain, Tubal-Cain is said to have been the “forger of all instruments of bronze and steel.” He used his superior physical strength to make high-quality weapons. Tubal-Cain is the only human referenced in the Bible, which suggests that his abilities were of particular importance within early Hebrew religion and culture. In addition to being the first blacksmith, scholars believe that his talents with metalworking and altering the physical and chemical composition of materials means he is also humankind’s first chemist.

Ptah is the god of craftsmen, the creation of the physical realm, and the creation of the underworld in ancient Egyptian religion. Ptah is said to have created the world from nothing, which mirrors a blacksmith’s ability to create objects from raw materials. A patron of craftsmanship, metalworking, carpenters, shipbuilders, and sculpture, Ptah represents the development of not only the earth in its wild form, but also the development of civilization and the rise of man as a creator. The worship of Ptah as a major deity started in Memphis, the capital city of ancient Egypt. Over time, he rose in importance and popularity to be considered one of the five major gods in ancient Egyptian religion alongside Ra, Isis, Osiris, and Amun.

The citizens of the ancient Near East city of Ugarit (located in present-day Syria) worshipped Kothar-wa-Khasis, a blacksmith, shaman, architect, and inventor. His name translates to ‘skill’ and he was venerated not only by Ugaritic people, but also by Phoenicians, Canaanites, and Jews. Kothar-wa-Khasis had the important job of crafting weapons for warrior gods and kings. His skills were renowned and coveted by the most powerful leaders in Ugaritic religion. Besides creating weapons, it was believed that Kothar-wa-Khasis used his craftsman skills to build beautiful, ornate furniture for another revered deity: Asharah, the goddess of water.

According to the ancient tale of the Myth of Baal, Kothar creates two magic clubs called Yagrush and Ayamu for Baal, which he later uses to defeat the god of the sea, Yam.

Tvastar is the “heavenly builder” of Hindu religion. He is a craftsman, blacksmith, and general creator of the universe. He is also known as Vishvakarma. Although not much is known about Tvastar, his importance is illustrated by the fact that he appears in the ancient Rigveda texts. Tvastar’s significance in ancient Hindu religion mirrors that of other blacksmith and craftsman gods and shows that the skills of blacksmiths were respected in ancient Eastern civilizations.

Perhaps the most well known blacksmith god, Hephaestus is also the god of fire and metallurgy in ancient Greek mythology. His father is Zeus and his mother is Hera. Although he is considered the only ugly god in Greek mythology, Hephaestus married the goddess of love and beauty herself, Aphrodite. Ancient Greeks believed that Hephaestus served as blacksmith to his fellow gods and goddesses and created iconic pieces of weaponry and armor such as the helmet of Hermes and the shield of Achilles.

Hephaestus established his forge in a volcano, and it was thought that he caused an eruption every time he worked. Although he is the god of fire and he created very deadly weapons, Hephaestus is not a menacing brute. He is known for his kindness and actually prefers peace among gods and humans. Hephaestus is commonly depicted working over an anvil in ancient Greek art.

Vulcan is the Roman counterpart to Hephaestus. He too represents fire, metalworking, and the forge. Vulcan is the son of Jupiter and Juno, and according to mythology, Juno thought he was so ugly that she threw him into the ocean to be raised by sea nymphs. One day, while walking along the beach, Vulcan discovered a fire leftover by sailors. He became fascinated by the heat and power of the flame and started experimenting with melting different materials. This led to his discovery of blacksmithing and he became an expert craftsman. Like Hephaestus, Vulcan created weaponry for the gods. In Roman art, Vulcan can be seen wielding a blacksmith’s hammer.

Svarog is the supreme god in many Slavic traditions and his name means “place of the sun.” Although Slavic mythology is polytheistic in nature, Svarog is considered to be the creator and master of all other gods. As god of creation, the sky, forging, iron, and fire, Svarog held a great deal of influence within early Slavic culture and can be compared to Hephaestus. Svarog is the protector of blacksmiths and helps them cultivate their skills. According to tradition, Svarog is asleep and has dreamt the creation of the world and all living things. When he wakes up, it will mark the end of the world. Not much else is known of Svarog through written texts, since his story has traditionally been passed down through the generations using storytelling and song.

As the Celtic god of blacksmithing and architecture, Goibhniu is known for his craftsmanship and ingenuity. It is said that he helped design and build some of the most ancient churches in Ireland. In addition to smithing, Goibhniu also possesses talent in healing and other magic. He helped other gods by creating lethal weapons that never missed their mark. Although known for creating deadly weaponry, the ancient celts believed Goibhniu was a warm, friendly, and generous deity.

He is the eldest of two other brothers, who together are known as “The Three Bold Gods.” The anvil is the common symbol of Goibhniu, but the hammer and sword can also symbolize Goibhniu’s power. Goibhniu’s Welsh counterpart is Gofannon, who is nearly identical in personality and abilities.

Talented and cunning, Wayland the Smith is the Anglo-Saxon god of blacksmithing,  as well as supposedly being a lord of the Elves, according to certain legends.

He is known across Europe, though the roots of his story can be traced to the Icelandic Poetic Edda of the 13th century. According to legend, Wayland the Smith learned blacksmithing as an apprentice to Icelandic dwarves. After completing his apprenticeship, Wayland the Smith crafted weapons and jewelry prized by gods and kings. His work became highly coveted by an evil Swedish king, who captured him as he was sleeping and cut the tendons in his feet so he could not escape. Wayland the Smith, being clever and magical, crafted himself a pair of wings to fly away from his prison and back to the safety of his forge.

Ogun is a Nigerian god and the inventor of tools, weapons, and technology such as blacksmithing. He is, according to Nigerian mythology, the creator of the earth, and used his tools to clear away the wilderness and establish civilization. He is considered hard-working, and prone to anger, and uses his warrior capabilities to fight injustices. Ogun is believed to live in the wilderness alone where he works at his forge and helps maintain the world as we know it. Tools associated with Ogun include the hammer, anvil, and machete.

Samurai legends and origin stories abound in Japanese culture. Amakuni is a legendary blacksmith who played a major role in the development of samurai swords. He is thought to have lived around 700 AD and created the first single edged, curved tachi sword that samurai would rely on for centuries to come.

Amakuni was employed by the emperor to craft weapons for his army, which was preparing for war. As the soldiers returned from battle, Amakuni noticed that each soldier carried a broken sword. He spent seven days and seven nights trying to figure out how to create a stronger sword that would perform better in battle and did not eat or drink anything until he came up with a plan. Finally, Amakuni understood how to make a better sword. He decided to cover the soft core of each sword in a layer of hard steel to make it stronger and designed a curved blade that could withstand the blows of enemy weapons. It is believed by some that Amakuni became immortal due to the shedding of his blood during the sword-making process.