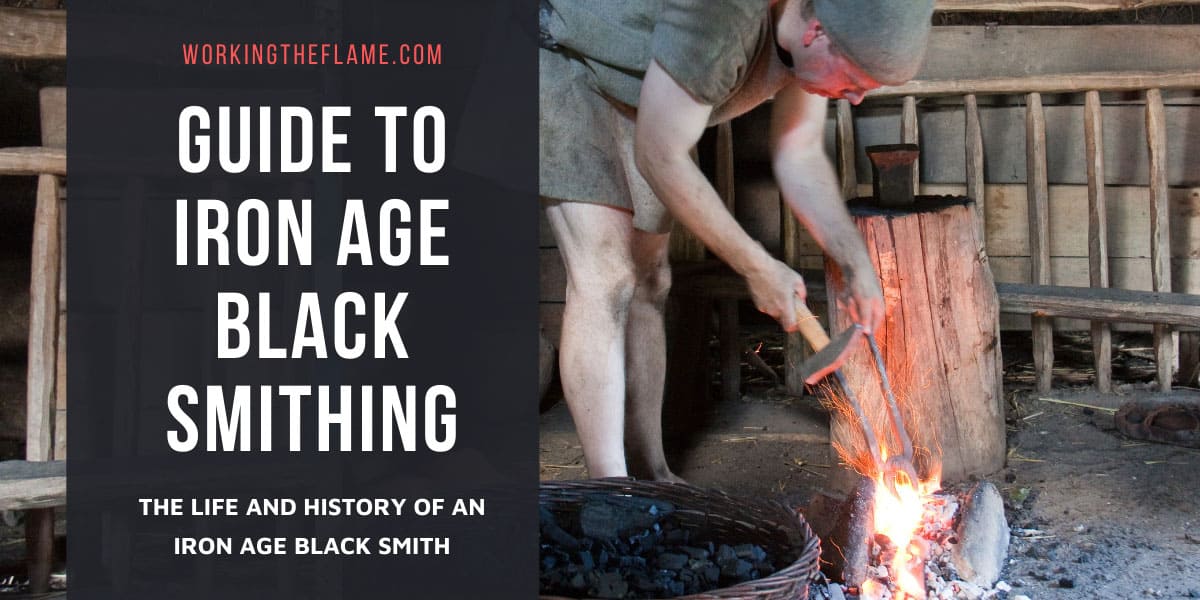 Blacksmithing is an ancient profession with roots in the Mediterranean and Near East regions. Over centuries, blacksmithing spread to civilizations across Asia, Europe, and Africa and evolved to fit the cultures that adopted it.

While the tools and weapons crafted by Iron Age smiths were more primitive then many made today, the core techniques and characteristics of metalworking have stayed the same.

To fully appreciate the blacksmithing tradition and its nuance from era to era, let’s take a closer look at smithing in the Iron Age, when several key advancements were made and smithing took off as a profession.

Mesopotamian Origins & the Spread of Blacksmithing

The earliest form of blacksmithing is said to have begun in Mesopotamia in around 4500 BC. Ancient metalworkers crafted mainly with bronze, which was soft and able to melt and form in molds. Centuries of bronze working followed in not only Mesopotamia, but also Greece, Egypt, and other areas in ancient Europe and Africa.

The Mesopotamian or Near Eastern Iron Age is thought to have begun in as early as 1500 BC when the Hittites discovered how to forge and temper iron ore. This process produced wrought iron through the reduction of iron ore with a heat source.

Iron soon became a highly sought after material for weapons and armor manufacturing. Iron proved far stronger than bronze and did not require casting in a mold.

The Hittites kept iron forging a secret from surrounding peoples until the civilization scattered in around 1180 BC. Blacksmithing with iron then spread to neighboring nations, Greece and the Balkans, and into more distant areas of Europe.

Iron Age blacksmiths used a charcoal fire to heat iron. They used many of the same forging methods used today such as hammering, reheating, quenching, and cooling. The cooling process was improved upon when these early smiths discovered that slow cooling could produce less brittle metal.

Still, early forging was finicky due to inconsistent methods of heating, and many finished weapons ended up too soft to form a sharp blade or hard but brittle.

In the later Iron Age, bloomery furnaces replaced open charcoal fires, further improving the forging process. Smiths made these furnaces from clay and stone. Air from bellows was forced into the furnace through pipes called tuyeres. Furnaces allowed blacksmiths to better control air flow and temperature and, in turn, improved the quality of finished products.

Most of the products created by Iron Age blacksmiths were practical tools or weapons. One example is an iron dagger discovered in Egypt that is thought to be made around 1350 BC.

Iron Age Europeans also crafted weapons from this new material. Blacksmithing became an extremely popular profession in the city of Athena in Greece, and the Greek god Hephaestus was a blacksmith.

The ancient Celts were know for their iron weaponry, but perhaps not for a positive reason. According to an eyewitness account during a battle between the Celts and Romans in the 4th century AD, Celtic soldiers could only take a few swings of their iron swords before having to take a break to step on the blade to straighten it out again.

Iron blacksmithing changed not only weaponry, but also farming in Europe. Everyday people now had more durable tools and implements than ever before and could maintain their crops more efficiently. Blacksmiths experimented to improve the products they sold to customers, and this resulted in the further advancement of agriculture.

The development of bloomery furnaces in the later part of the Iron Age played a huge role in the improvement of finished products and the efficiency of blacksmiths. The use of furnaces and bellows would continue into the early, mid, and late Middle Ages, when the blacksmithing profession experienced even greater innovation and organization.

Blacksmithing has improved and evolved since the Iron Age, but many of the same techniques remain in practice today. In Blacksmithing as we know it today exists because of the discoveries of the Hittites and the spread of their knowledge around the world.