Blacksmithing is an ancient trade that is enjoying a resurgence in popularity. Forged in Fire, trending YouTube videos, popular social media accounts, and the plethora of classes and demonstrations available in cities around the world are helping to revitalize blacksmithing and more and more people are familiarizing themselves with the craft.

Whether you have been smithing for years or are just entering the world of blacksmithing, you’ve likely encountered a blacksmithing term or phrase that you are unfamiliar with.

Below is an A to Z list of common blacksmithing and forging terminology that will help you identify different materials, tools, and processes.

Knowing the fundamental terminology makes learning and practicing smithing a lot more simple and enjoyable, so consider adding the following terms to your blacksmithing vocabulary and reference the list whenever you need it! 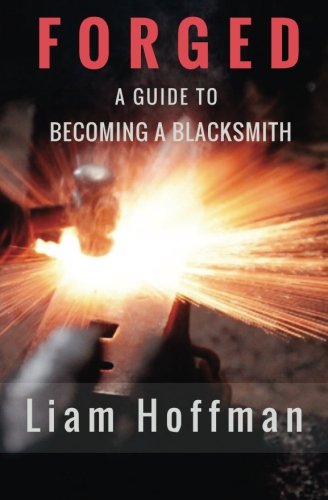 Forged a Guide to Becoming a Blacksmith
Buy on Amazon

A mixture of two or more metals dissolved into each other. Usually possesses greater strength, hardness or different melting point than the separate metals it is made of.

Heating metal and allowing it to cool slowly. Makes metal softer and therefore easier to work with. Prevents cracking and other issues when working the metal.

The heavy, durable object on which items are forged. Supports the material being struck while resisting the inertia of the hammer. Possesses various features that support different stages of work, such as a horn, punching holes, and upsetting block.

A student of blacksmithing or other traditional crafts. Historically, apprentices worked for a master for a period of time and exchanged their labor as an apprentice for an education in smithing. Today, master blacksmiths offer apprenticeship programs that require less time but still provide valuable hands on learning opportunities.

The condition of a forged project without other processes completed.

Historically, a device used to blow air on a forge’s fire to make the intense heat required for forging. Made of wood and leather with a teardrop shape and nozzle.

A stake anvil that is slender in shape, a tool with one or two horns that is made to fit in an anvil.

A bend, bulge, wave, kink, or other imperfection in a workpiece.

Rough parts on the edge of a workpiece after cutting.

The process in which carbon is absorbed into a piece of low carbon metal, which produces a hard “case.” Methods include sealing an iron piece in a container packed with charcoal and heating the container or immersing the piece in a molten salt bath for a period of time, then removing and quenching it.

The process of pouring hot, molten metal into a mold for shaping.

Irons with at least 2% of carbon. The presence of carbon makes the metal more brittle and is not recommended for forging. Casting and machining are appropriate uses for cast iron, which has low ductility and high stiffness.

The manipulation of metal without heating it. Saves energy by not requiring heat, but requires heavy tools. Is sometimes called room-temperature forging.

The process of making a piece wider, longer, or thinner.

Using a tapered punch to form or enlarge a hole.

The degree to which a metal can be manipulated without breaking, splitting, rupturing.

Surface hardening technique in which metal is heated to an intense degree and then water quenched.

A substance that prevents oxidation. A substance used to join metals through soldering, welding, or brazing. Borax is a common forge welding flux.

A furnace where metal is heated before being hammered. It usually includes a forced air source, an enclosure to hold the fire, and a vent.

Bending metal with a hammer or other tools like a press, roll, etc.

A rounded tool similar to a hammer head that sinks easily into heated metal and thereby works metal faster than a hammer could.

The process of making a metal harder by quenching, tempering, hammering, or adding alloys.

Small square hole at the top of an anvil designed for tooling.

The use of a coarse file on hot metal which is usually heated to a dull red. This process is common in blacksmithing but quickly wears down files.

A smith who has finished their apprenticeship and is now eligible for employment at another shop or who can start their own business. Some journeymen continue to learn from masters and gain the title themselves, but most blacksmiths remain at the journeyman level.

Cooling metal at room temperature after forging. Allows the stresses in the metal time to relax.

A mixture of water and acid or alkali that is used to remove oxides from metal. Vinegar, citric acid, and sulphuric acid are all examples of pickles.

High carbon, crude iron that comes in oblong rounded bricks that resemble a pig. Another term for cast iron. Not recommended for traditional blacksmithing purposes, but is a common metal one should be familiar with.

The process of rapidly cooling hot metal to harden it.

Oxide that forms on metal during the heating process. Flakes off easily when hammered.

The process of heating and melting ore to extract metals.

A place where a blacksmith works. Can be a professional or home setup tailored to the specific work needs of the smith.

Iron with a small amount of carbon, which determines the steel’s hardening ability.

The process of hardening metal by heating and quenching it.

Hammering the end of a bar or other workpiece to shorten the length and increase the width.

Made of pure iron crystals. Lack of carbon makes the iron very ductile and is commonly used in decorative ironwork. Requires special care when cutting, forging, and punching.