The Victorian era of jewelry making and wearing follows the reign of Queen Victoria of the United Kingdom. Fashion historians distinguish three periods of jewelry design within the Victorian era: the Romantic period, the Grand period, and the Aesthetic period.

The fashion preferences and personal life of Queen Victoria provided the inspiration for how jewelry was made and worn in each period. Victoria proved so popular that European and American designers and wearers of both luxury jewelry and more affordable costume jewelry emulated her style as it evolved rather dramatically throughout the decades.

While the 19th century is commonly referred to as the Victorian era, other social, political, and economic factors influenced fashion and jewelry making as war, exploration, and advancements in industry developed in the middle and later parts of the 1800s.

Socially, the middle class continued to grow in the 19th century as cities and their economies expanded to accommodate more people. What was once reserved only for the wealthiest of society could now be purchased and enjoyed by the “middling sort” as well.

Politically, the reign of Victoria and the admiration she received from people in Europe and America has already been established as a major influence on fashion and jewelry design. In America, however, other political events, such as the Civil War, had a large impact on how people, especially women, consumed jewelry and other inessential but desirable items.

Finally, the economic growth occurring in the 19th century contributed to the type of jewelry created, the materials used, and cost to acquire certain pieces. The industrialization of America, Britain, and other countries in the Western world made jewelry more accessible, varied and widely worn then in all prior history combined.

Let’s explore the Victorian era of jewelry making and wearing by taking a closer look at the three main periods within the century. While each possesses its own characteristics, we can also identify the continuity of jewelry design in the 19th century and understand how jewelry made and worn during the Victorian era continues to inspire the designs created today. 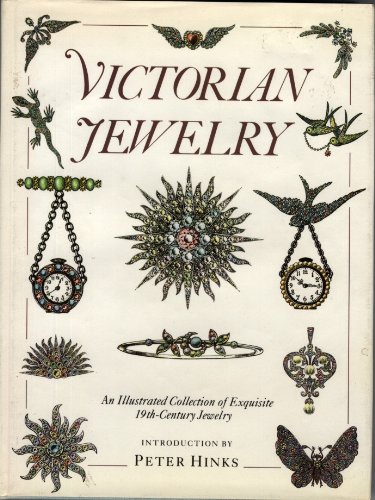 The first main period distinguishable within the overarching Victorian era of jewelry and fashion is the Romantic period. Lasting from 1837 to 1860, the Romantic period encompassed a sense of romance, as the name suggests, but also fantasy, whimsy, and playfulness. The marriage of the queen, the exciting years of her youth, and many exotic global influences were reflected in the jewelry styles of this period.

The fantastical elements so popular in Romantic period jewelry paid homage to the Middle Ages. Medieval nostalgia was all the rage in England during this period, with Middle Ages and Renaissance motifs like flowers, branches, leaves, grapes, berries, and serpents being incorporated into jewelry designs.

Tiaras fashioned in medieval styles were common from around 1830-1845, were formed as half circles and featured the previously mentioned motifs.

Global expeditions, conquests, and increased travel opportunities during the Romantic period also heavily influenced the jewelry worn during this time. Decorative elements from faraway places, such as Assyrian lotus flowers and Algerian tassels, cords and knots found their way into Victorian gold jewelry design after the conquest of these countries by Europeans.

Victorians traveled more widely than their predecessors, and in doing so, brought home Italian mosaics, lava cameos, Swiss enameled brooches, and other trinkets that diversified jewelry styles and inspired designers to incorporate ‘foreign’ elements into their products.

Cameos were one of the most popular jewelry items during the Romantic period, and were larger and bolder than ever before. Commonly made from onyx, chalcedony, and amethyst, these brightly colored, high contrast accessories bore the images of famous people or loved ones.

Other common jewelry items of the time included earrings and bracelets. From around 1837-1840, long earrings dominated fashion and women wore them in the evening. The ear-covering hairstyles of the 1840s and 50s made earrings mostly obsolete, but they then reemerged as a fashion staple in the 1860s in the form of small hoops and simple drop designs.

Bracelets were the most popular jewelry piece of the Romantic period and women commonly wore them in groups on both wrists. Turquoise, blue enamel, and diamonds featured on many bracelet designs of this period.

Besides the gemstones and materials previously discussed, coral proved extremely popular in dark red and light pink shades. Pearls also dominated jewelry. Mother of pearl frames filled with delicate, tiny seed pearl designs were all the rage and embodied the feminine feeling of jewelry in the Romantic period.

Innovations in jewelry manufacturing in the early part of the 19th century made the jewelry making process more efficient than ever before. Jewelry makers crafted all pieces by hand until 1852, when hand operated presses allowed cutting and stamping settings to be completed in record time.

Costume jewelry made of gilt or pinchbeck and glass faux gemstones could also be produced quickly and inexpensively, and made jewelry accessible to a wider subset of the population.

The Romantic period of jewelry and fashion gave way to the Grand period, which lasted from approximately 1860-1885. This period of 19th century jewelry history is characterized by large, heavy, and bold pieces made from striking, contrasting materials.

Jewelry styles matured as Queen Victoria did, and echoed personal events that happened in her life. Tragically, Victoria lost both her mother and husband, Prince Albert in a short span of time, and women across Europe and America adopted mourning jewelry in response.

Jet, onyx, black glass, skulls, and the hair and cameos of loved ones all made up mourning jewelry in the Grand period. Although perhaps unsettling to us today, incorporating the hair of a deceased loved one in jewelry design was one of the most popular ways of memorializing them and keeping them physically close to survivors.

The outbreak of Civil War in America further popularized mourning items and lockets suspended from black velvet ribbons with photos of relatives away at war.

Not all jewelry fashions in the Grand period proved morbid, however. A fascination with exotic places continued as new expeditions in Egypt in the 1860s popularized Egyptian jewelry styles and bright colors. Scarabs and falcons ornamented necklaces, brooches, bracelets, and earrings. Green, red, and blue enamels were used to achieve an Egyptian flair.

The jewelry of Greeks and Romans also enjoyed a revival, with reproduction coin jewelry popular in the middle and upper classes.

Jade, a stone not yet used in abundance, gained popularity as French influence in China spread. Another newly celebrated material widely used in jewelry design in the Grand period was tortoiseshell, which proved both beautiful and practical.

Common motifs featured in Grand period jewelry included insects like flies, wasps, butterflies, and spiders, and stars. Star designs were formed from pearls, diamonds, turquoise and opals and decorated a wide range of accessories during the 1860s and 70s.

Popular jewelry items in the Grand period included tiaras, earrings, brooches, and pendants. Designers formed tiaras out of gold leaves as an ode to Greeks and Romans. The Tiara Russe, a trendy style in the 1870s, featured diamond spikes.

Pendant-style necklaces were all the rage amongst women, who hung them on chains, lengths of pearls, and ribbons.

By the 1880s, diamonds again replaced colored gemstones as the most sought-after element of jewelry design. Interestingly, this had much to do with technological advances in lighting. Electric lighting became more widely used by this time and fashionable ladies believed this new, brighter lighting made colored gemstones appear too gaudy.

The late 19th century saw the rise of the Aesthetic period of Victorian era jewelry design. Between 1885 and 1901, trends in jewelry appeared to push back against the heavier pieces popular during the Grand period and return to the softer, nature-inspired accessories of the Romantic period.

Common motifs in Aesthetic period jewelry pieces included peacocks, flowers, insects, and Japanese-inspired designs. Like the Romantic period, nature, whimsy, and femininity were features of the Aesthetic period, but a certain amount of practicality and minimalism also influenced Aesthetic jewelry items like never before.

By the close of the 19th century, women acquired newfound freedoms in work and politics. New innovations and social movements allowed women to be more active outside the home. Because of their mobility and greater participation beyond the domestic sphere, women preferred jewelry that was less fussy.

Diamonds were now worn mainly in the evenings, as respectable ladies thought them to be in poor taste during daylight hours. Stud earrings, small pins, and other jewelry made from gemstones like opals, amethyst, and emeralds gained popularity over more opulent fashions.

Short-lived but highly influential art movements inspired new types of jewelry to be created in the 1890s: Art Nouveau and the Arts and Crafts Movement.

The Arts and Crafts Movement pushed back against the industrialization that dominated economies in the late 19th century. In this movement, an emphasis was placed on creating jewelry for its beauty, rather than only for its monetary value.