The 18th century, or Georgian period (named after the five Georges that ruled England during this century) stands apart from European and colonial jewelry of earlier times. Several new trends came to the forefront in the upper classes as well as parts of the middle class as both groups enjoyed a good amount of leisure and experimented with new jewelry styles.

Fashion icons in England, France, and elsewhere heavily influenced the way jewelry was made and worn by upper class society and trends appeared and disappeared as frequently as month to month in courts across England and continental Europe. Interestingly, developments in candle making allowed people to wear daytime and evening jewelry like never before. Elites now enjoyed longer balls, and other evening social events where ornate and sparkling jewels enhanced their appearance.

In a world of increased globalization and the prosperity that came from colonization and global trade, the types of materials used and the techniques applied to jewelry making became more abundant and complex. The opening of diamond mines in India and Brazil in the 1720s made these and other precious gemstones more widely available.

Let’s dive into the history of jewelry in the 18th century and examine the ways in which jewelry served as a mirror of larger trends in society at the time. In many ways, the key features of jewelry in the 1700s remain influential in the jewelry we make and wear today, so it is important to understand the accessories of this opulent time period and the people who wore them. 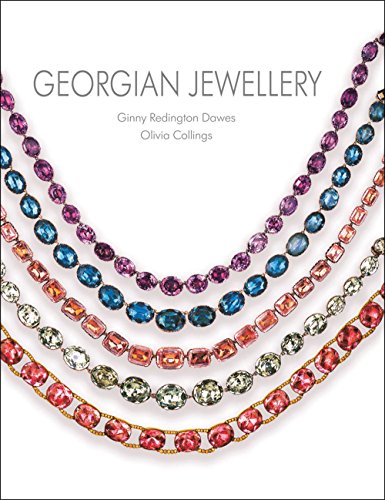 The heavy, symmetrical, and mostly gold jewelry of the 17th century slowly gave way to the lighter, more asymmetrical and organic styles of the 18th century. Most jewelry made during this period featured openwork designs that were just as beautiful as the metal used to make them and the jewels set within them.

Goldsmiths living and working in the 1700s crafted jewelry by hand and took painstaking care to ensure the satisfaction of their clients and contribute to jewelry innovations of the time. 18th century jewelry was elegant, ornate, and purposeful to the wearer as a symbol of status and personal style.

Metals, Gemstones, and other Materials Used in 1700s Jewelry Making

Nobility milling about the courts of England and France enjoyed wearing decadent jewelry made from precious metals and stones. Gold and silver were as prized in the 18th century as they are today, and jewelers made most of their finished products with one of these materials.

Silver especially enjoyed great popularity in the 1700s, as it complemented the plethora of diamonds used throughout the century after the opening of mines in the 1720s. The lightness and brightness of silver reflected and accented various cuts of diamonds and paired well with the softer pastel colored fabrics that became popular with nobility and upper class individuals.

Goldsmiths also considered silver a practical option for jewelry making with clients’ demands for intricate and heavy gemstone settings constantly increasing. Silver proved strong enough to endure the weight of many gems, and secured them in place in ornate and large jewelry pieces.

Other common metals used during this time period included 18K or higher yellow gold, steel, iron, and a material called Pinchbeck, which is an alloy of copper and iron. These metals formed the foundation for the precious and semi-precious gemstones that ornately decorated 18th century jewelry.

Jewelry making techniques varied depending on location, social status of clients, and the rapidly changing fashion trends of the 18th century. Most goldsmiths utilized the following techniques and gemstone cuts to create their intricate, one of a kind pieces.

Repoussé involved hammering metal into pretty designs. This technique was especially common in the first half of the century. In 1750, the invention of the rolling mill saved goldsmiths from hand hammering each piece and sped up the jewelry making process overall.

Cannetille was intricate wirework inspired by the flowing, organic designs of embroidery at the time. Large and small gemstones could be set within the wirework design, which served to accentuate and frame them.

Enameling and glass overlaying continued to be popular throughout the 18th century, and were more affordable jewelry options for those of the middle and upper middle classes.

Gemstone cutting methods improved dramatically in the 1700s and allowed gemstones to be manipulated in unique ways depending on client preferences. The table cut was square with a flat top and bottom. The rose cut rounded out a stone or diamond and gave it a domed top and flat bottom.

The old mine cut was especially popular and featured a rounded square shape with many facets. The cabochon cut was similar to the rose cut, in that it had a defined rounded top and flat bottom. Finally, the briolette cut shaped stones into a faceted teardrop, which featured on many women’s jewelry pieces.

Goldsmiths used the wide array of materials and techniques discussed to create accessories that matched the personalities and ambitions of their wearers. The most common jewelry pieces crafted and worn in the 1700s included necklaces, bracelets, earrings, brooches, rings, buckles, and hair ornaments like tiaras, bandeaus, combs, and hairpins.

Necklaces came in all shapes and sizes, with the most popular being the rivière style. This choker length necklace featured individually mounted gemstones linked into a circle by delicate metal.

The large hairstyles and wigs popular among those in the 18th century upper class were accessorized with ornaments made of metal, diamonds, and feathers that moved with every step.

Most 18th century women wore earrings in several large, heavy, and trendy styles that paired well with their towering hairdos. Single drop earrings featured an earring post and one dangling pearl or gem. Girandole earrings had three drops of ornately set stones in various sizes. Pendeloque earrings, similar in design to their single drop counterparts, were longer and even heavier. The invention of clip on earrings in 1773 made styles more widely available to those without pierced ears.