A Timeline and Brief History of Glassblowing & Lampworking [Updated]

Table of Contents show
1 A Timeline and Brief History of Glassblowing & Lampworking [Updated]
1.1 The Ancient Origins of Glassworking
1.2 Roman Era Glassworking
1.3 Glassworking Throughout the Middle Ages
1.4 Glassworking in the Age of Enlightenment
1.5 19th Century Glassworking & Glass at the Turn of the Century
1.6 Studio Glass Movement of the 1960s

Glassworking processes like glassblowing and lampworking have been a part of human history for thousands of years. From the initial discovery of glassworking in ancient times to present-day glass artistry and large-scale manufacturing, glass production is an important part of the human experience.

The types of glass items produced and the methods of production have changed over time and yet remain recognizable in workshops today. Glassworking as both a traditional artform and as a major industry has a fascinating history, which starts with mysterious origins. 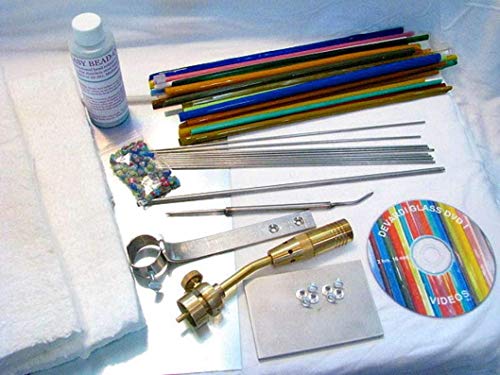 The Ancient Origins of Glassworking

After much debate, most historians agree that the true manufacturer of glass and discipline of glassworking likely began in ancient Egypt around 1500 BC and was adopted shortly thereafter by the people of Mesopotamia. The Egyptians made small glass items such as beads, figurines, and tiles. These tiles were considered both decorative and functional and covered the walls and floors of most temples.

Shades of royal blue and turquoise were some of the most popular colors for glass because they resembled the semi-precious stones lapis lazuli and turquoise that held great value in early civilizations. The colors and general appearance of the tiles had aesthetic value but also protected the surfaces of temples from damage.

Ancient glassworkers developed and refined their craft over an extended period of time through experimentation with silica sand and quartz pebbles. It is likely that the work of other craftsmen like potters and metalworkers inspired early glass artists to experiment with heated glass.

Glassworking in ancient times did not resemble glassblowing as we know it today. The process began by making hunks of glass that were then shipped to faraway workshops to be crafted into finished products. Once in the workshops, craftsmen used molds, fusing, grinding, and core-forming techniques to form the rough glass pieces into functional and decorative items. Artisans added copper oxide and cobalt oxide to the glass to create the shades of blue that were so popular during this period.

What we know of the glassmaking process during the time of the ancient Mesopotamians is found on clay tablets, many of which from the library of King Ashurbanipal (668-627 b.c.), now located in the British Museum. The 3,300 year old instructions for making glass detail the materials needed and the entire glassmaking process. Sand, soda ash, an unknown “white plant,” and a copper compound were listed as necessary ingredients in the ancient glass recipe.

The glassblowing process as we know it today developed sometime in the 1st century BCE when the Romans encouraged the people of Phoenicia to continue refining the craft. The Romans recognized the profits to be made from glass. Although relatively cheap to make, glass could be traded with gold.

By the 2nd century CE, glass products spread throughout the Middle East as a popular trade item. The Greeks honed the technique of producing glass on a pipe (the glassblowing practice still done today) and glassmaking became a competitive market.

Glassworking Throughout the Middle Ages

After the fall of the Roman Empire, glassworking continued to gain popularity in medieval Italy. By 1200, Venice dominated the glassmaking industry. The city had access to high-quality sand and abundant forest for raw materials and fuel

. At one point in the height of their success, the Venetians decided to move production to the island of Murano to safeguard their glassmaking secrets. Word made its way around Europe regardless, and by 1400, the French, Germans, and others across the continent were making glass.

In the later middle ages, glassworkers developed several important innovations. Flat glass was invented by creating a glass cylinder, cutting off its ends, and then flattening it to create one continuous sheet of glass. Thus, windows were born!

Cathedral workers in France learned how to produce new colors for their windows, building on previous knowledge about glass additives and colors. Artisans also began experimenting with ornamentation. Glassworkers decorated vessels and containers with animals, flowers, and other figures.

Glassworking in the Age of Enlightenment

As the high middle ages gave way to the age of Enlightenment, the demands for glass increased and the techniques used in glass production advanced significantly. The publication of Antonio Nerr’s book L’arte Vetraria or The Art of Glass exposed the secrets of Italian glassmaking and created a boom in production across Europe.

Science became mainstream in the 17th century, and the invention of microscope lenses and laboratory glassware forced glassmakers to experiment with new additives to create stronger, heat and chemical resistant glass. In 1676, lead glass was invented. By adding lead to glass, craftsmen produced a glass that proved stronger and shinier than its counterparts. The mixing of glass with other materials became common in the 17th century and would continue to be a popular practice in the glassmaking industry moving forward.

Glass made its way to the New World in the 1600s on the ships of colonists. Glass production started in America shortly after and the abundance of sand and timber on the continent encouraged glassworkers to make and sell a variety of items.

19th Century Glassworking & Glass at the Turn of the Century

The industrial revolution in Europe and America altered and automated glass production. In 1820, the mechanical press was invented, making it easier and cheaper to make glass products than ever before. As soon as two decades later, glass became a common household item among people of all social classes.

While household glass was common, Americans made little scientific glassware in the 19th century and imported glassware from countries like Germany and the Czech Republic. In the 1880s, the Germans invented borosilicate glass, or Jena glass that could withstand high temperatures and a range of harsh chemicals. Beakers, bottles, and other laboratory glassware was blown thin to prevent thermal shock when used in lab settings.

Outside of the scientific community, glass innovations made strides in resolving economic demands and social issues. 1903 saw the invention of the automatic bottle blowing machine, which cut production costs by 80% and helped end child labor in the glass industry.

The development of heat-resistant Pyrex in the 1920s popularized glass bakeware and other cookware. Now, every home used glass items for cooking and dining. While glass art existed during the early 20th century, most people viewed glass items as necessities to be used daily for practical things.

Studio Glass Movement of the 1960s

The attitude toward glass shifted in the 1950s and into the 1960s as craft media gained popularity across America. Old-fashioned and handmade items regained interest after World War II.  In 1958, a ceramics professor at the University of Wisconsin-Madison named Harvey Littleton started experimenting with glassblowing on a small scale.

Dominick Labino, an inventor and fellow glass artist helped Littleton create the first personal glassblowing furnace. It was small enough to sit in independent workshops and studios and heated to the proper temperature for artistic glassblowing projects.

In 1962, with help from Labino and the Toledo Museum of Art, Harvey Littleton hosted the now-famous studio glassblowing workshops that marked the beginning of the studio glass movement.

Littleton started the United States’ first college glass program at the University of Wisconsin-Madison and some of his first students included Dale Chihuly and Marvin Lipofsky. Littleton and his students experimented with glass in ways never seen before.

Taking inspiration from the glass techniques of Czech and Italian glassmakers, the American studio glass artists created sculpted glass that defied decades of purely functional glass products and pushed the limits of glass as an artistic medium.

Glass has been with humans since ancient times and continues to play important roles in our modern age. Glassblowers and lampworkers today have much in common with those of the past. From the glass tiles and figurines of ancient Egypt to the sleek sculptures of the present, glassworking is integral to the history of human cultures and will continue to be in the years ahead.